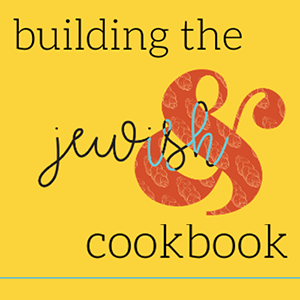 Pizza Napoletana, a sheet-pan pizza topped with tomatoes, parsley and parmesan, was one of the most popular offerings at Corona Bakery in Montreal. This bakery was opened in 1932 by Kat’s great-grandfather, Donato Monaco, after he immigrated to Canada from Italy. While learning to make this pizza, Kat decided to replace the lard traditionally included in the recipe with vegetable shortening. This was a way to honour both her Italian and Jewish identities, and carry a tradition rooted in her upbringing forward into her Jewish (by choice) life.

Join us every month as together we build the Jewish& Cookbook – recipes from households blending traditions and cultures!

This is part of our Jewish& program, explicitly gathering multi-faith, multi-cultural and multi-ethnic Jewish families for Jewish exploration, education and celebration.