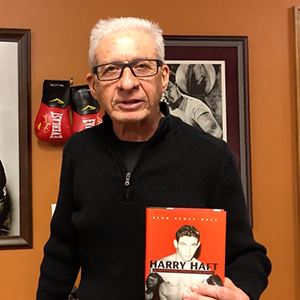 Alan Scott Haft was born in Brooklyn, New York in 1950. He is a 1973 graduate of Queens College, New York. He received his J.D. from the University of Miami School of Law in 1978. He lives in Albuquerque, New Mexico with his wife Gail. They have two children, Hartley and Jamie.

The story of Alan’s father Harry Haft, Survivor of Auschwitz, Challenger of Rocky Marciano was first published in hardcover by Syracuse University Press in 2006. Today the book is available in hardcover, paperback, and as an audio book. It has also been translated from English into German and Polish. A graphic novel based on the book, Der Boxer, by acclaimed German cartoonist Reinhard Kleist was published in Germany in 2006 and is available in 26 countries.

A major motion picture The Survivor, produced by BronStudios, directed by Barry Levinson, and starring Ben Foster premiered in September 2021 at the Toronto International Film Festival. HBO/HBO MAX has acquired the North American rights to the film.