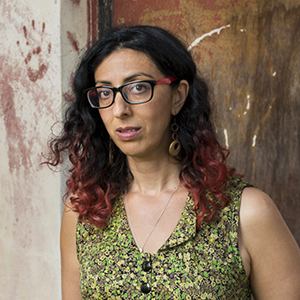 Author Ayelet Tsabari and her book, The Art of Leaving, in conversation with Dr. Angy Cohen, University of Calgary’s Postdoctoral Fellow in Israel Studies (pre-recorded in Israel).

Ayelet Tsabari (צברי איילת) is the author of the memoir The Art of Leaving, winner of the Canadian Jewish Literary Awards, a finalist for the Hilary Weston Writers’ Trust Prize for Nonfiction, and The Vine Awards for Canadian Jewish Literature, and an Apple Books and Kirkus Review Best Book of 2019. Her first book, The Best Place on Earth, won the Sami Rohr Prize for Jewish Literature and the Edward Lewis Wallant Award for Jewish Fiction. The book was a New York Times Book Review Editors’ Choice, Kirkus Review’s Best Debut Fiction of 2016, was nominated for The Frank O’Connor International Short Story Award, and has been published internationally to great acclaim.